Since 2010, Heights Bicycle Coalition has collaborated with physical education teachers and school officials to promote Walk or Bike to School Days.

In 2014, the City of Cleveland Heights submitted School Travel Plans for four public K-8 schools (Canterbury, Oxford and Roxboro Elementary Schools, and Monticello Middle School) and one K-8 parochial school (Hebrew Academy), along with an application for non-infrastructure and infrastructure grants to improve safety for pedestrians and bicyclists around these schools.

Later in 2014, the Ohio Department of Transportation’s Safe Routes to School Program granted Cleveland Heights $7,000 for non-infrastructure initiatives and $200,000 for infrastructure improvements. The funds will be spent, largely in 2015, on better crosswalks, crossing guard and safety patrol gear and more.

Bike Rodeos and Other Bike Safety Events for Families & Children 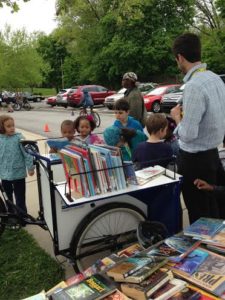 When Fairfax Elementary School students finished their bike rodeo (in progress in the background), they each could pick their very own free book from the Heights Libraries Book Bike.

In past years, most of the CHUH district’s schools have held bike rodeos, bike/wellness programs or assemblies, thanks to collaborative efforts involving elementary and middle school physical education teachers and principals, PTAs, the bicycle unit of the Cleveland Heights Police Department and the Heights Bicycle Coalition. The Heights Youth Club (a Boys and Girls Club) also collaborated with the Cleveland Heights Police Bicycle Unit to offer a bike rodeo.

A steering committee is working on plans for a family bicycling event (All Geared Up) to be held on April 16, 2015, at Canterbury School, which is open to all residents of the school district.

Fairfax and Canterbury Elementary Schools offer after-school bike clubs in the fall and spring. Kids learn about safe cycling and go on group rides to a bike shop, playgrounds and Shaker Lakes.

Since 2012, Heights residents have been able to take the League of American Bicyclists Safe Cycling Class to brush up their safe bicycling skills. Taught by League Certified Instructors and promoted by Heights Bicycle Coalition and the City of Cleveland Heights, the classes received very positive feedback from participants.

Heights Bicycle Coalition members have participated in and promoted the Share the Road education program of Bike Cleveland. 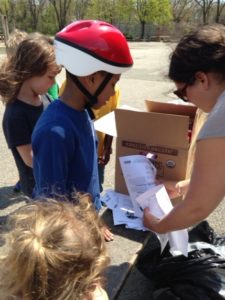 In May 2014, 70 Roxboro Elementary School students received helmets provided by the Ohio Chapter of the American Academy of Pediatrics.

For several years, physical education teachers, Cleveland Heights Police and the Heights Bicycle Coalition have acquired children’s bike helmets for children that need them, either for free or at a low cost.